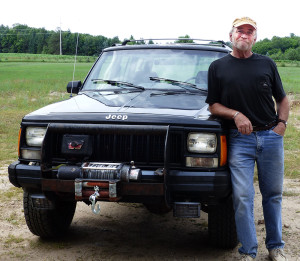 Around the county in a sturdy black Jeep

Alas, the years are beginning to show on the old ’92 Cherokee. If she’ll just give me one more season, I’ll give her a rest next year. I’ve tugged logs out of the woods with it, stumps out of the ground and covered over 300,000 miles since I bought it in 1999. It’s not ready for the scrap pile, but it’s earned retirement, that’s for sure.

The visit in July was another good one. With Traverse City’s National Cherry Festival in full-swing, there was no shortage of things to do. I saw the Blue Angels at the airshow, rode in a fire truck to the big parade and drove the county roads on a few early mornings to get a few photographs in ‘the golden light’ hours.

A Good Summer (so far)