”Kerrville is about changing the world…one song at a time…”

Early this year, I got a call from Dalis Allen, promoter of the Kerrville Folk Festival, asking if I would consider attending this year’s festival as one of the judges for the Kerrville New Folk Award (For Emerging Songwriters) ; an award I won myself along with five other finalists in 1994. Let me say from the very beginning, I won on my second attempt. I‘d been a finalist is 1993, but was not selected as an award winner. Without hesitation, I told her I’d be honored and that I’d do it again this year. I’ve had a stomach-ache ever since.

Now, for Dalis, I would do anything. After 20 years of participating in the festival myself, first as a guest, then as a New Folk finalist who didn’t “win”, then a New Folk Award winner, then nine years’ Threadgill and main-stage performer, and then ultimately as a corporate sponsor and performer, Dalis and festival founder Rod Kennedy have both become very close friends of mine, and we’ve participated together in other music and songwriting events through the years. I can’t think of anything I wouldn’t do for either of them or for the festival, but what I felt when she asked me that question was absolute trepidation. I’d been a judge the year after winning the award myself, and I’d also been a finalist and not won, so in fact I do know what it feels like to both not win the award and then to win it on a second try. 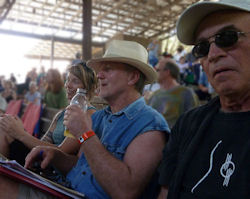 Having been a former New Folk judge, I also know what it feels like to be one of the ‘peers’ who decides which six of 32 finalists receives the award and who doesn’t, and I wasn’t looking forward to being in that position again, ever. In spite of the huge vote of confidence it conveys to be asked, judging New Folk is the only thing in my 20 years at Kerrville that I remember as ever being painful, and it is painful – start to finish. This is my family. Ask any former judge…they’ll say the same.

I flew to San Antonio, was delivered to the festival office last Friday (May 27th) , put on my VIP pin, took a deep breath and walked onto hallowed ground.

On both Saturday and Sunday I joined the other two judges, singer/songwriters Patrice Pike and Johnsmith, with Dalis, Rod Kennedy and songwriter-hero Steve Gillette to meet with the 31 finalists before their turn to sing the two songs they’d submitted. On both days we did our best to make clear that being finalists, each and every one of them had already “won” – they were each one of 31 chosen from over 700 entries, each was being “inducted” into the Kerrville and folk World-community, each being honored with the real opportunity to perform to what is, no-doubt, the most devoted and song-loving audience in the world. The best thing about that part of this little speech is that it’s true. Being a New Folk finalist is advanced membership, and membership in this family is significant for a lifetime. 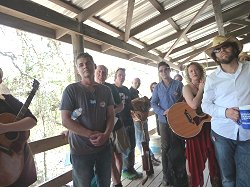 I watched each performance, listened and read the lyrics to every song from all 31 finalists, and I know John and Patrice did, too. We took every song and performer seriously, and said so often. As soon as the last song was performed, the three of us retired to a motorhome on the property to deliberate. We agreed on two things – 1) to come to a unanimous consensus, and 2) to keep what was said between us, between us. So at this point I have only my own opinions and observations to share, and, admitting openly that I have absolutely no authority to be the judge of anything or anybody, but given my participation as one of the three judges, I feel obliged to share the experience.

I didn’t know and hadn’t heard any of the finalists before they stepped on-stage. There wasn’t a bad song in the bunch. None of the performers forgot the lyric, or played out of tune, or hit a wrong chord. Some were similar, some were completely unique. All were experienced enough to be there. Every one of them seemed prepared and excited to be there. And every one of them was committed to what they were doing; it was obvious. But we could only pick six winners. It was a hard call from the beginning and we three judges said so several times apiece.

On “judging” songs and performances: 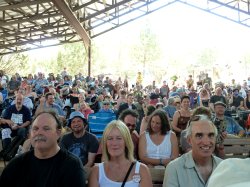 We all judge songs. We judge them every time we hear them. We like some songs better than others and remember them for life (ours). We like some artists better than others. My observation as a listener has been that I like songs and artists that “connect” with every-day experience – my everyday experience. I’m not listening because I need to know how someone else feels or thinks….or how the artist feels. I’m listening to enhance the experience of what I feel. A songwriter is a story-teller…a poet…an interpreter. I’m listening for an interpretation that I can relate to, and when I’m lucky, one that I learn from…even comedy songs can be a vehicle for that if they’re structured well. 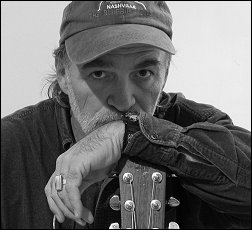 Now, I can’t speak to what qualifies one songwriter to judge another’s songs. Personally, I’m not sure anything really does. Writing songs is personal, to a great degree. On the other hand, in the world of commercial songwriting – writing to make a living – the aim from the onset is to write to the audience’ experience. It’s to give them something they want more of. With 40 years of writing, nearly as many years of road time and having lived and worked in the Nashville grind for fifteen years, I’m familiar with both processes, and I do value both respectively. I know a lot of songwriters who can write in both styles. But to address “judging” New Folk finalists, well…there’s no way around it – it’s a nod and a wink to a newcomer from within the family. No matter how you spin it, it’s about having someone who’s been in your shoes, who knows what you want and who once wanted it as bad as you do right now, listen to your “work” and make a judgement as to whether your skill at the craft of interpretation and your delivery of it makes the connection they think it needs to. Again, to that, I can only speak to my own experience, but I can tell you that audience response also played a big part in my thoughts as I was listening. After all, I wasn’t the only one there…

For me, it really does come down to the song. It has to last in my memory. It doesn’t need to “move” me , but it has to touch something in me. There has to be something that lasts more than the two or three minutes it takes to hear it, and I have to be able to take something away with me after the fact. For me, it doesn’t have to fit into my age group preferences, or my personal musical taste, and especially doesn’t have to be about something I agree with. It just needs to shed light… there needs to be a spark of something I can remember. Applause at the end of a great song comes automatically, without other considerations. I’m clapping because you “got me”. That’s not very complicated, and I assume it’s the same or similar for most everybody. I may not remember someone’s name, but I’ll always remember the song…it’s like an imprint on heart and mind. 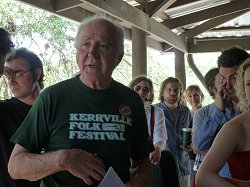 I can tell you honestly that there were at least 31 songs and 31 performances I can remember as I sit here writing this. All of the finalists did a great job. And after listening to all of them Patrice, John and I had to pick six songwriters to give the award to. We each had formulas, scoring sheets, comments and critiques for making our case for each we thought most of. When we added up and combined what we had, felt, remembered and had as “afterthoughts” , we each had to make concessions until we agreed unanimously. I can tell you that we all had the same “favorites”, but not all in the same order, so we had to deliberate – negotiate – make sound arguments. That’s how it was. And when we finally got there, I delivered the list of award winners back-stage to Dalis. The judging was done. I wish that was all there is to it. Five minutes later, I was answering questions, semi-defending my “judgement” and looking for people to console and encourage. Again…it’s family.

I know our best was accomplished, but I know too that each of us felt disappointment for those we had left disappointed, and as I said earlier, I for one, know what it feels like to be in that position. Winning the New Folk Award is a high honor, and for any songwriter, putting ego and even best wishes to winners aside, coming so close and not being chosen as a “final” finalist is a shake-up when you don’t hear your name announced from the main stage. I’ve been there. Somehow you have to reconcile being happy for your friends who won with the disappointment of not winning yourself. You feel bad at the same time you feel good. It’s’ wierd, and I’m sorry for that. But what I know, from my own experience, is that the disappointment doesn’t last. It gets replaced with something unexpected – because at some point in the next few days that follow, the encouragement and real-love appreciation from both friends and new fans reveals that it really is true…you’re in a family that wants and now will expect more songs from you, and… the world does keep changing…one song at a time.

I was honored to participate at Kerrville this year – the 40th anniversary of the festival. My sincere congratulations to all of the New Folk finalists – and, Welcome to the family…