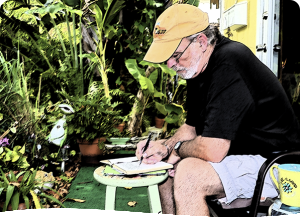 I got an invitation from my friend Jenifer Hall to stay at her little bungalow on Big Pine Key for a few days while her family came for their annual visit. It was a getaway opportunity I couldn’t pass up.

I headed across Old Tamiami Trail from Naples on Wednesday morning and enjoyed a quiet ride across the Everglades to Homestead then on to Highway 1 at Lake Surprise. Wasn’t long that I was taking in the familiar, humid ocean smells of the Florida Bay and Jewfish Creek. (This is the only habitat in the northern hemisphere where you’ll see North American crocodiles).

The little cottage was a perfect getaway and I spent most of my time venturing out to explore the area by day and then back in the afternoon to write. The day was a little humid and warm but perfect for my purposes.. it was weekday, the locals were working away and I had a few days to myself. 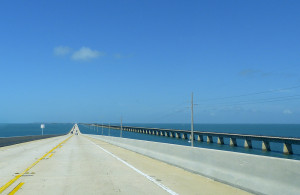 There’s only one road in and out of the Keys. The Overseas Highway (Highway 1) travels from Miami to Key West and was built on right-of-way of the Overseas Railroad, the Key West Extension of the Florida East Coast Railway, abandoned by Henry Flagler’s failed company in the late 1920’s and early 1930’s.

Flagler was one of the three co-founders of the Standard Oil Company and committed more than $50,000,000 of his personal wealth to the project (between 1905 and 1916) but it never became the cargo and passenger line he anticipated. With slower than expected up-take and the events leading to hard times in the economy forced the great founder’s company into bankruptcy twenty-five after his death in 1913. All that remains today are the bridges, foundations, abutments and a couple of concrete mile marker posts that still demonstrate the scale and intensity of the innovative and monumental railroad project.

More about the Key West Extension 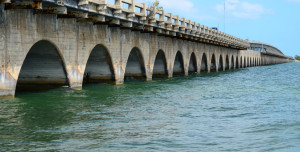 You can see little flashes of the past as you cruise by in the car, but coming to an understanding of what the Keys really are and what they mean to the integrity of South Florida living requires stopping the car and getting out… walking up to these huge remains and seeing first hand the beauty of hundred year old concrete still standing as sound in the water as the day it was poured, still supporting the tons of steel and roadbed that served in the early years as the only way from island to island, the only road to Key West.

Big Pine Key
It takes a little over four hours to get to Big Pine from my home in Naples and it’s a drive I enjoy more every time I take it (as noted above). I got there mid-afternoon and settled in – computer on desk, journal and pen, cameras and no plan at all except to relax for a couple of days.

One of the bigger attractions to Big Pine are the numbers of Key Deer, very small deer that have the run of the neighborhoods and parking lots all over the island. They’re not exactly tame, but that’s hard to tell when they come right to you when approached.

Key West
I made the usual run to Key West, planning a visit to the Monroe County Library to meet up with a historian I’ve met with before, but the city was so busy and packed with parked cars on the side streets I wasn’t able to find a place myself – decided it was too busy for my state of mind.

A walk down Duval Street in downtown Key West never fails to entertain. With more than 300 bars on the island, the city never sleeps. Hemingway frequented many of the downtown watering holes, including Sloppy Joe’s Bar – still a favorite hangout.

Big Torch Key
I’ve spent some time driving the back roads on several of the Lower Keys in the past year and have found that each one has a unique story and history. The Calusa Indians settled the area over a thousand years ago. The Spanish brought their families from Cuba. Pirates hid out between the islands. Wildlife is quiet but ever-present.

There are still lots of wild areas, marshlands and mangroves worth exploring. I spent the better part of one afternoon taking photographs of the backwaters on Big Torch Key. Very beautiful and remote.