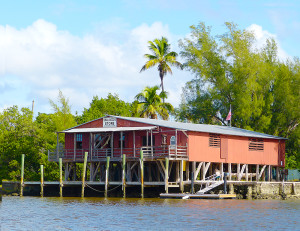 I took a sunrise drive into the Everglades this morning and ended up at Chokoloskee Island, the location of Ted Smallwood’s Store (est. 1890). I walked to the spot along the narrow beach where the infamous killing of Edgar Watson took place on a restless October morning in 1910.

Ed “Bloody” Watson was a bad character that showed up in SW Florida  around 1906. At that time this part of Florida was a favorite hideout for a lot of unsavory characters, the “law” a distant concern given that no law man cared enough to risk his neck in the swamps and gator-infested mangroves that make up this part of the Everglades.

Watson’s violent reputation preceded him and the local people were scared of him.  He’d been in plenty of trouble with the law in north Florida before escaping west years before and was best known as the most likely killer of famed female outlaw Belle Star in Oklahoma. He was credited with or flat-out blamed for several other murders including his own cousin and in various bar brawls from  Pensacola to Oregon. Though he was tried for some of his crimes, he was never convicted and it’s presumed he killed as many as 57 itinerant workers  hired as labor for his sugar plantation.  Located on Chatham Bend, an island not far from the store, the plantation grew cane sugar, boiled down to make syrup which he sold in Key West.  He’d hire them as far away as Naples and Fort Meyers to work making syrup, but when it came time to pay wages he killed them instead.  Need a fresh supply of workers, he’d head back up to Naples and Fort Meyers, hiring more of the vagabond types to replace those he’d just buried. 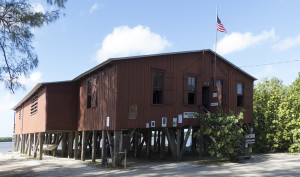 I was walking around the place going over the story in my mind, standing on the very spot where Watson was gunned down when the owner drove up. He’s married to the granddaughter/owner of the old store, now an open museum and general store listed on the Historic Register. The center isle of the store is the same as when her grandfather, Ted Smallwood, ran the place in 1910. It’s a walk back through time, for certain.

I spent the morning with them, listening to the stories they grew up with around the history of the place when Smallwood would sit through the night campfires and swap stories with the Seminoles that traded there. They poled dugout canoes for over 40 miles to make the trip and often camped out for a week at a time before heading back with goods from the store.

Asking about how the Watson killing “went down” , I spent the rest of the morning walking, talking and listening with Gary McMillin  (the owner/proprietor) in the very spot where, 103 years before, 20 of the townsmen confronted Watson after finding the body of local resident Hannah Smith dead and stuffed with pig iron and flywheels meant to weigh her body down in the water. Watson became belligerent and raised a shotgun which misfired. There had been a hurricane a few days before and the only shotgun shells he had were wet. 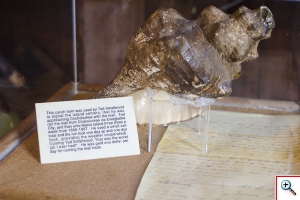 The armed locals responded promptly and shot him 33 times. As the story goes, each took a shot so that none of them could be singled out should the law prosecute. Apparently familiar with Watson, the Lee County sheriff came to investigate, but didn’t push on the matter, leaving it to history. Adding insult to injury, the sheriff exhumed Watson’s body from the shallow grave the townsmen had thrown him in away from the store;  dragged behind a boat with a rope around his neck to an island in the bay and buried with the rope still attached, the other end tied to a tree. His remains were moved to a cemetery in Fort Meyers where the grave can still be found today.

Gary even took me for a ride in his boat so I could get a “money shot”, as he called it, of the store from the water. Really nice people… been there all their lives.

This is a must-see historic spot in the Ten Thousand Islands, southwest Everglades and the book is well known, highly recommended.

Chokoloskee Island is a shell mound, presumably built by the Calusa Indians a thousand years ago. It’s made of oyster shells piled six feet deep, the shells coming from the oyster beds in the shallows surrounding the island. The tide was out while I was there; there were oysters everywhere.

I also met local author Rick Magers at the store and came back with one of his books. More about him at: http://grizzlybookz.net/index1.html