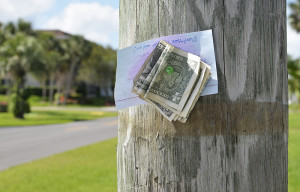 Two weeks ago, as I was pulling into the alley behind my home here in Naples, I had to wait for a guy that was blocking the driveway. As he stepped from his car, I watched him pin something to the telephone pole next to the street. I could see that it was a note and a dollar bill he was pinning to the pole. I figured he was leaving it for someone who he must know, I drove in as he left and parked the car.  Didn’t think much about it at the time…

A few days later, I noticed the note and the money was still there, only now there were three or four dollars. When I took my ‘prayer’ walk that night, I stopped at the pole to read the note. Written by a simple hand, I read the words… “You never know what tomorrow will bring”… “(don’t take it, just add on)”.

I added a dollar to it.

It’s been two weeks now and it’s still there, and I’ve since added a dollar or two more … but so have other people. It looks to be somewhere around ten or fifteen dollars as of this morning.

It goes to show how people really are. Nobody’s taken it yet. More bills keep accumulating. And it’s a busy alleyway.. with lots of people walking by through the day, kids riding their bikes and skateboards through at all hours and some of the local restaurant and shop workers making their way home to the other parts of town after their shift is up.

This seems like a simple, good idea. There’s room for the same on a lot of telephone poles…